This was initially used in old-fashioned telephone switchboards, Telegraphs, and for connecting headsets, handsets, and microphones into communication circuits.

I won't go into any technical details about the types of plug configurations, but I will guide you on how to identify the one you might prefer easily.

At the most basic level, the Jack might either support mono or stereo sound.

Mono or monophonic is when you have only a single audio channel, which means there is no left and right; you will get the same sound from both sides.

Stereo or stereophonic on the other hand reproduces sound into two audio channels to give a more natural two-dimensional sound distribution, e.g., when audio or music has a special effect in the left channel, you will hear this if the Jack support stereo output.

If it is a mono Jack, it would only have two rings, which are known as the tips and stem or sleeve.

The Ts(Tips and Sleeve) type has only one black line that separates the conductor from one another.

The very tip of the cap is separated by the second conductor, which is the stem or the sleeve.

In the case of a TRS cable, the Jack would have two black lines that separate the conductor from one another.

What is The 6.35mm/Quarter-Inch Audio Jack Best For?

The quarter-inch Jack or 6.35mm is the standard among audio professionals, music studios, and musical equipment.

It is more durable, rugged, and more comfortable to work with in different environments, here are some uses:

The mini-jack is the miniaturization of the quarter-inch Jack, the mini-jack gave rise to popularity due to the sony walkman released in 1970.

Practically, the ¼ inch jack would have been too large for the cases in portable devices, which makes the mini-jack a perfect fit for consumer electronics.

You'll mostly see the stereo ones in portable music players, don't worry, this also has a similar plug configuration as the 6.35mm Jack.

Again, to identify if the Jack is mono/stereo, you look at the number of rings on the Jack.

The average number on this kind of Jack is mostly the TRS(Tips/rings/sleeve) and TRRS(Tips/ring/ring/sleeve); 3 and 4 rings, respectively.

Remember, I said the stereo jack has more than two rings, this applies to the mini-jack as well, so don't get too confused.

TRS(3 rings) supports stereo sound, but it does not support microphones, meaning you will only be able to listen to music but can't make a call with these types of Jack/headphones.

TRRS(4 rings), on the other hand, supports both stereo and microphone, but sometimes the four-ring version isn't compatible with some devices. So, choose wisely.

Mono mini-jack does exist too, but you'll likely find them in stores as it is rarely used, always remember the rings, so you know if you are buying the right one.

I remember buying a mono jack instead of a stereo jack (terrible experience, don't be like me).

What is The Mini-Jack/3.5mm Audio Jack Best For?

While audio experts might argue that the quarter-inch is ruggedly designed and durable, the truth is there aren't any audible differences between them (at least, you won't notice even if there are).

The most notable difference you would spot between the two connections is the size, which makes them the standard option for personal audio players and smartphones.

Here are some use cases -

This is the smallest type of Jack, which is also referred to as a sub-miniature Jack.

The 2.5mm Jack is not as common as the 3.5mm jack, but you will find them used on communication equipment such as mobile phones, two-way radios, and cordless phones.

The most notable differences between 3.5mm and 2.5mm are their size, 3.5mm is almost 50 percent larger than the latter.

What is The Sub-miniature/2.5mm Audio Jack Best For?

This list would be incomplete without adding USB-C audio.

Although this is different from jacks, it would be a plus to understand/know what USB-C audio is.

USB-C is being adopted by the latest smartphones, such as the ones made by Huawei, Google, Samsung, and more.

Without further ado, let, 's see what it is.

USB-C is a 24-pin double-sided connector that is slightly larger than the micro-b connector.

Micro USB or micro-b connectors are the ones used on smartphones and tablets.

USB-C has replaced this in newer android devices e.g, the Samsung Galaxy Note 10, Google Pixel 3, Huawei P20 Pro, and others.

If you are wondering about the missing 3.5mm audio jack on your new smartphone, the USB-C serves as a modern replacement for the missing Jack, which can be used to connect wired accessories such as headphones.

This type of connector can be confusing as some devices don't conform to a universal standard, unlike the mini-jack that works out of the box.

Playing digital audio through headphones requires a digital-to-analog converter(Dac) and an amp.

The DAC converts the digital audio data into an analog signal that your headphone can playback and the amp increases the sound (the amp isn't always necessary though).

In contrast to the mini-jack, which only relies on the Dac and amp on your device to send an audio signal to the headphone, the USB-C comes in two types, which further complicates things.

You either have an Active Adapter with DACs or Passive Adapters without DACs, and two modes of audio output from devices i) phones without onboard Dacs, which sends out digital audio & ii) phone with built-in DACs, which send out analog audio.

When a phone doesn't come with an onboard DAC, digital audio is sent through the USB-C port on your device. Meaning the conversion by the DACS and amplifiers is done inside your headphones or adapters instead of the phone.

The problem with this is that it is a must for the headphone/adapter to provide its own DAC if the smartphone doesn't include it onboard, and unfortunately not all headphone does (at least the cheaper ones).

Another issue is that if you are using Active headphones, your device needs to support Audio Accessory Mode and the Audio Device Class 3.0.

Audio Accessory Mode is just some specifications that allow a USB-C port to send analog audio through its connector and into something that is plugged in.

So, in that sense, both the device and headphones need to support the spec for it to work correctly.

USB Audio Class 3.0 spec, on the other hand, makes it easier for the USB to support digital audio over USB, additional supports for new features such as noise cancellation, hot word detection, and more.

Another issue here is that if the USB Audio Class 3.0 spec isn't supported, it would lead to some features not working correctly, e.g., noise canceling.

On the other hand, Passive adapters without DAC rely on the conversion by the DAC and amp being done on the device, which means the headphone or adapter job is to pass through the signal generated by the amplifier and the Dac on the device.

Passive adapters without a built-in DAC are only compatible with devices that output analog audio. Analog would mean it would use the onboard DAC of the device to drive the audio signal for the headphone e.g., the Sony Xperia X32 AND THE Huawei P20 Pro support analog audio output.

If the headphone or the adapter has a DAC and the phone also has a Dac, the adapter would bypass the internal Dac and use the one in the adapter or headphones.

But if you are using a passive adapter with a phone with no Dac onboard, it would work.

You will notice this is a real mess in the head with different compatibility issues you'll likely face. Most of the reason for this issue is down to the rush in standards by the manufacturer and the mixture of active and passive headphones. 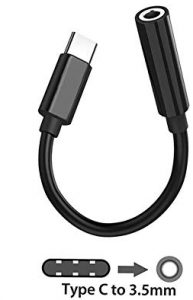 Remember I said the mini-jack just works out of the box, if your phone is missing the 3.5mm jack in place of the USB-C, you can always opt-in for a USB-C to 3.5mm jack adapter, which is a topic for another day.

I hope you enjoyed the guide.