I recently wrote a guide on the best chorus VST plugin and I said, a chorus occurs when similar sounds with approximately the same time and very similar pitches are perceived as one. A flanger effect is similar to a chorus effect, unlike a chorus effect where two signals are mixed at the same time, a flanger occurs by mixing two identical signals, where one signal is delayed by a small and gradually changing period, usually lesser than 25 milliseconds.

So, a flanger is also among the family of modulation effect, this is because it adds a time-delayed version of the sound to itself, and then vary the size of that delay over time. With this effect, you can create a beautiful and dramatic sound in your mix.

Enough of the gist, in this guide, I'll recommend the best flanger effect plugins you can use to enhance your music production creativity.

Instant Flanger Mk II is a flanger plugin by Eventide, it is an emulation of the instant Flanger used on David Bowie's "Ashes to Ashes" and Cyndi Lauper’s “Time After Time." With this flanger, you can create a pristine sound of a vintage tape flanging, stereo sweetening, subtle modulation, double-tracking and many more.

Additionally, it has dual outputs that create three different sonic images (shadow, deep and wide), so, with this option, you can create something interesting for example, Combining “Wide” Mode with the “Low Cut” control is an easy way to place multiple harmonies behind the lead. Fine-tune the resonance of your flanging effect by using the “Depth” and “Feedback” controls.

Lastly, it emulates the behavior of a tape machine, where it uses servo motors to run at a constant speed, and when someone behind the gear (engineer) pressed a thumb on the flange and then suddenly let's go, the motor servo bounces, this is like pushing down a spring, and when you quickly release your hand, you'll notice how it bounces, this is just a rough analogy of how it works. With Instant Flanger Mk II you can use its innovative "Bounce" control knob to add similar features, which in turn gives a real-world groove to your mix.

Antresol by D16 group brings the classic stompbox back to life, whether you are a guitarist, instrumentalist, or music producer, you'll find the Antresol useful in your music toolbox, as it pays careful attention to sonic detail to how it mimics the flanger effect of the classic stompbox of the mid-70s era.

The Antresol flanger also offers users absolute freedom of control over every aspect of the BBD-based delay line (including such nuances as calibration of the linearity of the clocking system or the number of analog memory cells constituting the backbone of the BBD).

On top of that, users also have the option to tweak a plethora of parameters such as on-PCB trimpots which would normally be inaccessible without taking the stompbox apart. the ability to delink the stereo channels and control the most important parameters independently for left and right (or mid/side, depending on selected mode), and more. 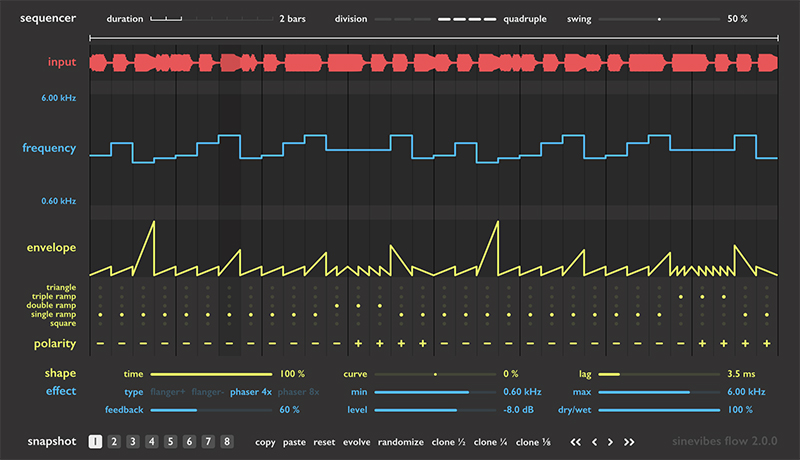 Before you proceed with reading the review of the Flow Flanger plugin, I want you to note that this is only compatible with mac, and won't work on PC computers!

Unlike your traditional flanger effect, Flow can be used for creating an animated flanger and it has a powerful tempo-synchronized sequencer that allows setting different effect frequencies, envelope shapes, and modulation depth per each of its 32 steps.

One thing I love about the Flow plugin is the way the editing tools is programmed, you can create a stepped pattern, complex riffs, random glitches, bubbles, and a plethora of other function.

Another useful feature of the Flow flanger is that it displays a live sound waveform and aligns its sequencer graphics with it, this way, you see what you are doing right off the bat. Since every element in its user interface is color-coded and features subtle animations, it makes your workflow unusually easy and enjoyable. Just don't forget the fact that it only works on macOS. 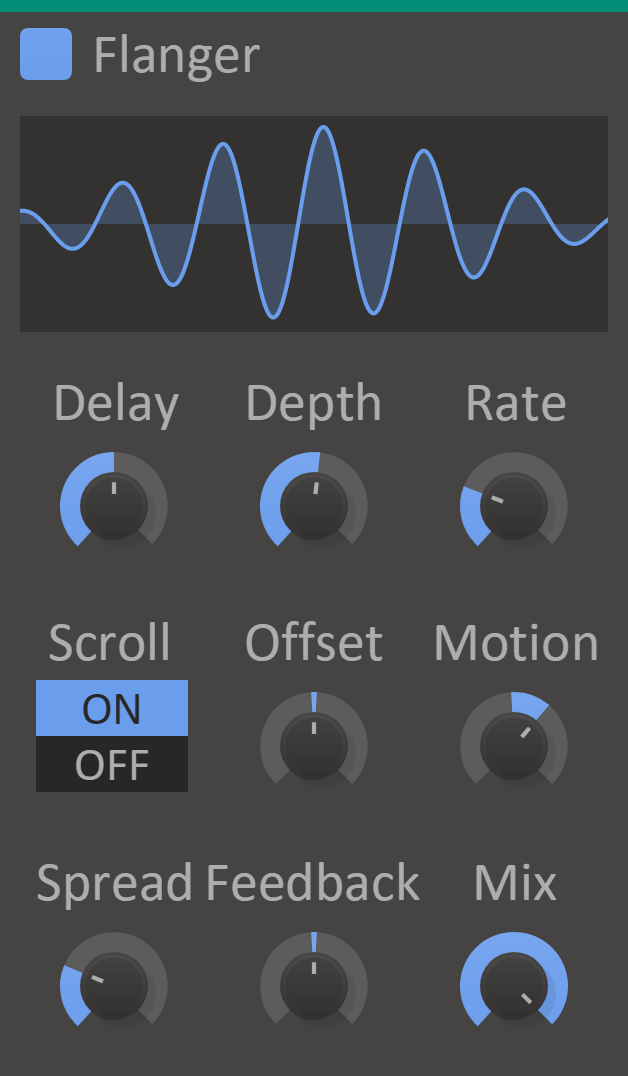 Most of my plugin reviews mostly have the kiloHearts plugins, I review them, because they are really good, and super simple at the same time. With their Flanger Snapin plugin, you can create a dramatically cyclic motion in your sound, think of it as a sweeping comb filter.

If you want to be in control of how the flanger effects work, you can adjust the length of the delay manually, and you can also control the modulation. Optionally, this effect can also add a phase shift between the dry and wet signals to create an infinite barber pole-style flanging effect upwards or downwards.

If you want something really simple, and a plugin that would work without having to tweak numerous parameters, then I would highly recommend Flanger Snapin by kiloHearts.

One powerful thing about this kiloHearts is that you can either use it as a regular VST/AU plugin, or you can use it with kiloHearts snapin hosts Multipass and Snap Heap where you can combine effects in amazing ways. This is like having effects in racks, you get the idea. 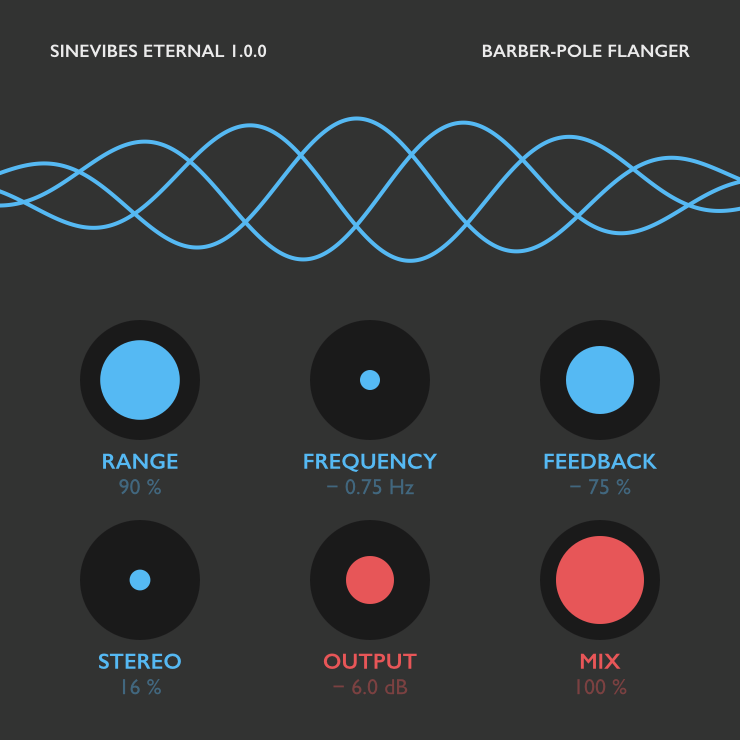 Just like the Flanger snapin by Kilohearts, the Eternal is also a very simple one that doesn't include tons of parameters, just tweak a few knobs, and you are set with a nice groovy flanger effect.

Unfortuately, it is only compatible with mac, and won't work on PC computers!

I have no idea why most of SineVibes plugins (at least the one I have tested) are only compatible with Mac computers, but anyway, onto its features...

It incorporates a barber-pole flanger effect, so, the way it works, is that it goes upward or downwards in a seemingly endless fashion, which is different from a traditional flanger which abruptly has its tone repeatedly go up and down. Sinevibes achieve this effect by using an array of three stereo flangers and six bespoke, thoroughly calibrated low-frequency oscillators.

With two distinct flanger tones thanks to positive or negative feedback, this plugin puts a whole arsenal of unique airy, bubbly, and even psychedelic effects in your hands, enjoy and make a great tune with this one, just note that it only works on mac. 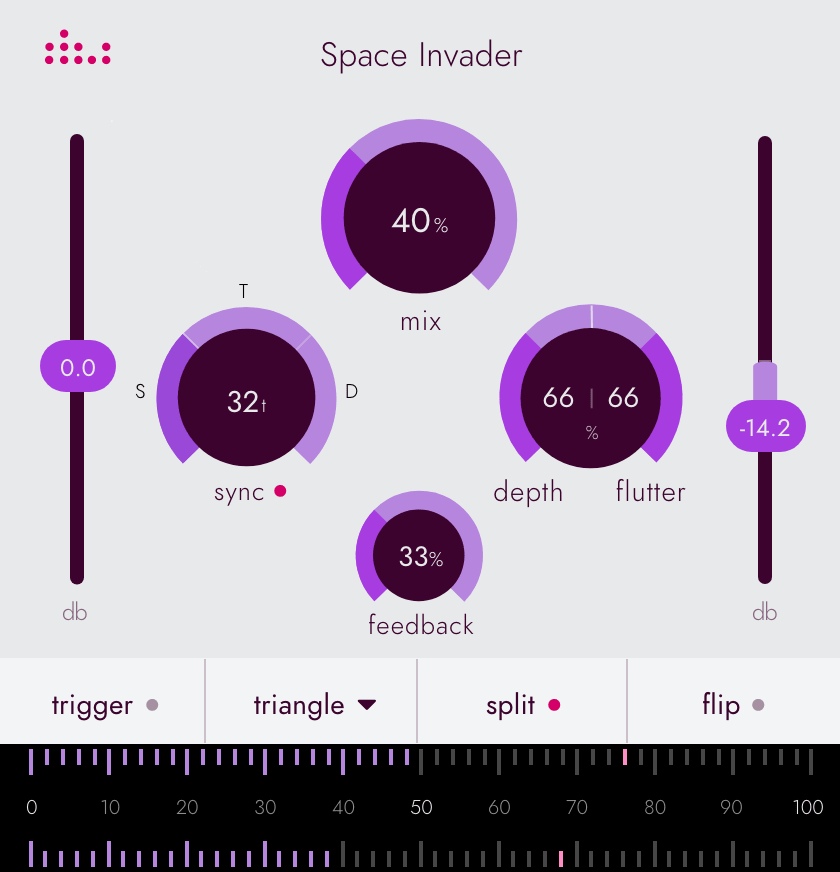 Unlike Eternal which works only with macOS, Space Invader is compatible with both Windows and Mac computers.

With Space Invader, you can create a rhythmical host synced flanger effects or precisely times riser that spans multiple bars. My favorite feature of this plugin is the fact that you can set the flanging speed from 1/32-bar to 32 bars, including strange, triplet, and dotted feel. Note that this would only work when in sync mode.

What if you are not in sync mode?

Well, you can see the flanging speed in hertz and use the trigger button to reset the flanger’s internal LFO, allowing you to control the flanger’s start point using automation. On top of that,  you can choose between three different LFO shapes, and have the option to introduce flutter and 90 degrees LFO offset for a wide stereo effect. If you are looking for something simple and at the same time complex, Space Invader by denise gives you full control of how you can control the flanging effect, and other useful nuggets to accompany you into creating something great.

According to denise, these are some use cases of using the flanger plugin:

3. “You like the sound of a flanger, but find the effect too linear and repetitive to use in your mix”. Most flangers create very predictable movement, and can get boring quite fast. The denise Space Invader lets you re-trigger the lfo start-phase, allowing you to create any flanging rhythm you like using automation. Combined with the additional flip, split and flutter functions, this gives you unlimited options to create fresh and exciting flanging effects. 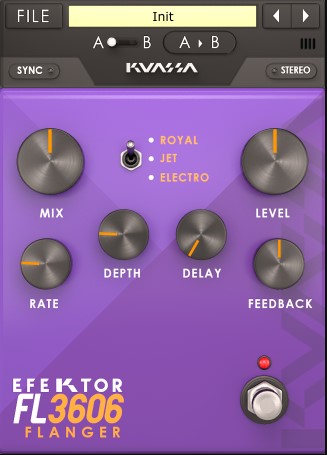 The last flanger plugin on our list is the EFEKTOR FL3606 Flanger by Kuassa, it creates a swooshing sound dubbed as the ‘jet engine’ effect, which includes: